Vogue is an experiment in creating a roguelite idle game.

The controls in Vogue are very simple

Right Click on most things to get information about them

NOTE - The game will save automatically and you can also save from the More screen. You cannot copy the key in web browsers (Unity thing), but that's OK because it also saves to cookies.

NOTE - Due to the nature of browser tabs and Unity Web GL, the game cannot progress very quickly when it's a background tab. Download the Windows standalone if you want to let Vogue run for a long time.

NOTE: It seems that if you leave Vogue on its own tab in its own browser window, it will run in the background though at the correct speed..

NOTE - your character moves on his own path and will always clear out enemies, loot treasure, and move to the next room. You do not need to click anywhere specific. Just clicking causes the hero to take action.

Songs From An Unmade World 2 by Visager is licensed under a Attribution License.
Based on a work at http://visager.bandcamp.com/album/songs-from-an-unmade-world-2

I have two critiques of the game.

First, Talos Skin is basically worthless. It doesn't take long before enemies start dealing dozens of points of damage; it's cheaper to upgrade Endurance and Strength enough that you annihilate a room of enemies before they can take a turn than it is to upgrade Defense enough to reduce the damage those enemies deal by a noticeable amount.

Shards of Heart don't have this problem; the amount of health each shard provides isn't a constant amount. It increases rapidly enough to make a difference. But Talos Skin just provides a flat -1 damage/attack, while enemy attacks rapidly scale past a few dozen damage into triple-digit damage. It maybe saves a couple potions per run, upgrading it might save another tiny potion, and your heart cards will likely drink those potions while fighting against an enemy too strong for the potions to help against.

Second, another scaling note. Most idle games let you increase the rate of resource generation as you progress, generally just a bit slower than prices grow (plus or minus new mechanics being introduced). Vogue just makes you stronger and tougher, letting you crawl deeper into the dungeon at the same speed.

Now, if the amount of cash gained from vanquishing enemies grew fast enough, or if the treasure chests were a larger fraction of your earned gold, this might work. But the chests in a room don't have much more gold than its monsters (and in some cases have less), and while I don't have the spreadsheets in front of me, the gold earned doesn't seem to go up that fast.

End result: I have to wait increasing amounts of time to scrape the funds together to buy upgrades. Which is technically true of most idle games, but there's usually some other upgrade I can buy to reduce how long I need to wait on the main upgrade. Something I can do to make it go faster.

Anyways. Aside from those balance issues, it's a pretty good jam game. Moving through the dungeon feels like an extra complication that doesn't add much, but it looks kinda neat.

I think there should be a card that you can purchase that makes it so that when you die, you leave behind a corpse with all of your upgrades, essentially allowing you to double everything, but the upgrade itself is ubsurdly expensive. 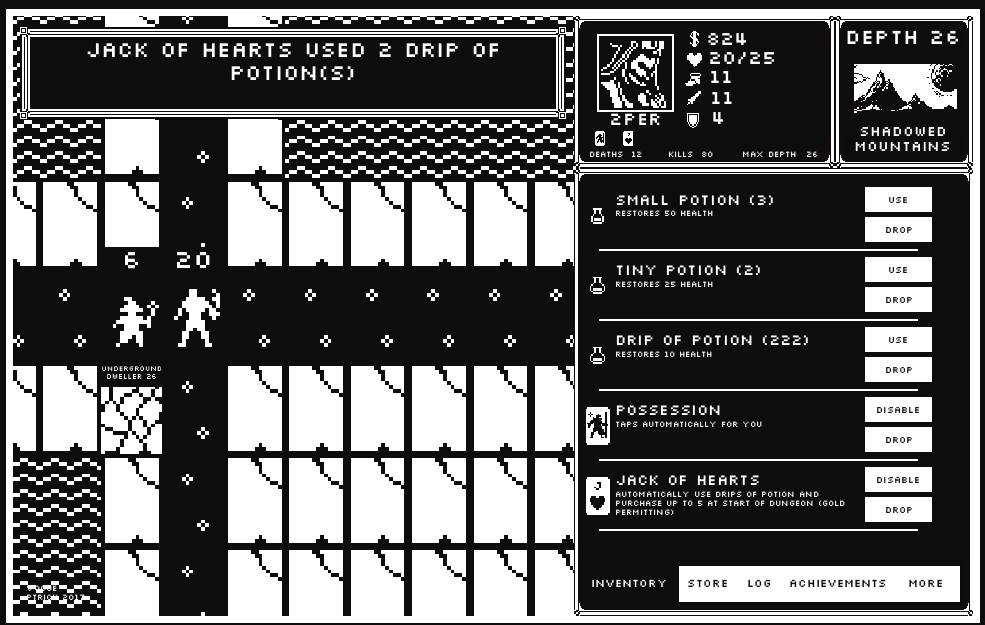 I think i may have broke this game. at around 2b health i used a 'shard of heart' and got negative 2b health. game restarted the levels but health still shows negative. far as i can tell this can happen within 24 hours of running the game. seems theres a max on health that rolls over into negative somehow.

Clever little game which has taken over my browser for the last 24 hours. Obviously there could be adjustments here and there, but I've seen the other comments.

Did anything come of this?

can i not play this on chromebook?

Might be a little late, but awesome game! I really enjoyed it, though it's very grindy. But perfect for killing a bit of time at work.
Simplistic enough to not be overloaded with stuff, but also not too little things to upgrade and do, even if it's just spamming potions.

Thanks! And yea - it's a clicker / idle game so they tend to be all about grind :)

You're right, though more are so than others. It's very satisfying once one manages to get past a certain enemy after a while of grinding, though. Lmao

I missing 2 achievements and I son't know what they are

The last three I got were

Power: Buy 10 each of Fibers, Feathers, Shards and Skins

thanks! I don't recall which ones I was missing but then but if I had to guess it was power and something else, can't recall what. I finished it long ago. Thanks for caring! 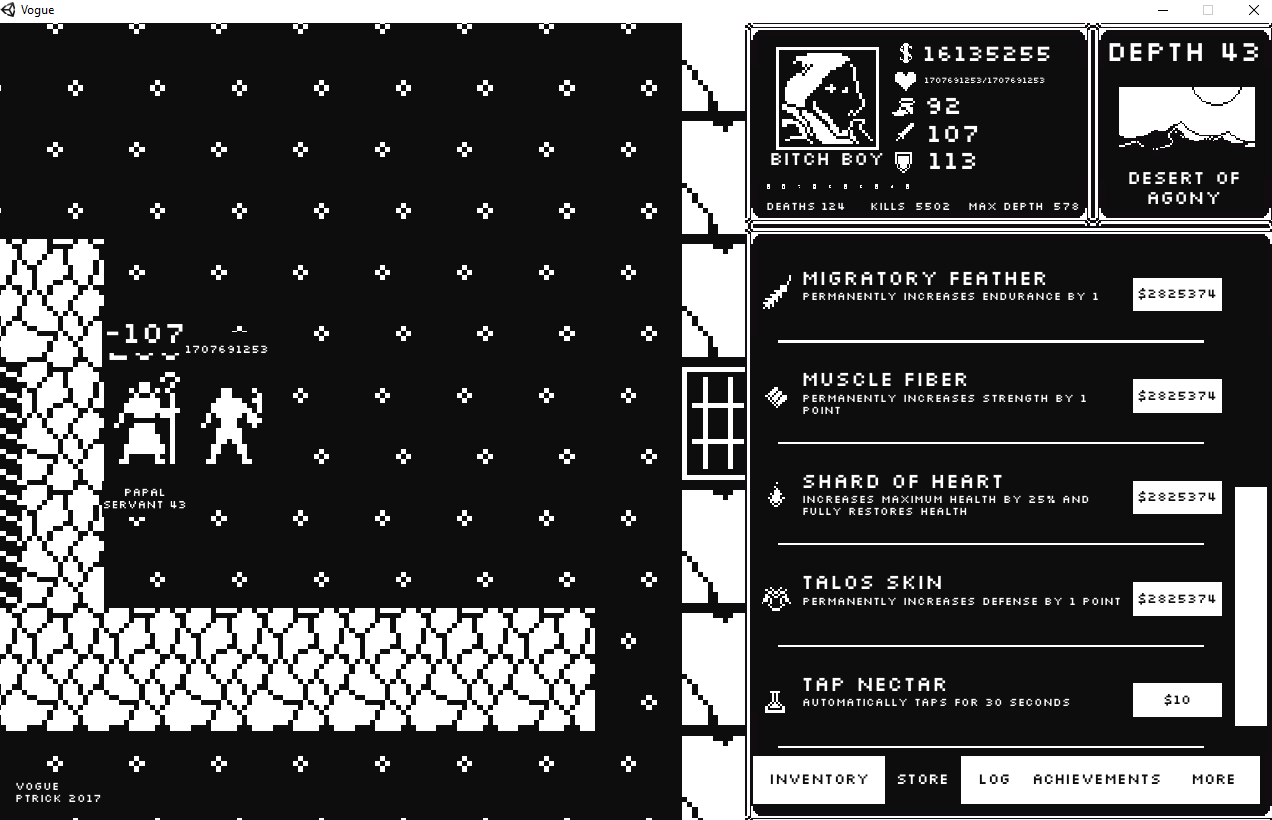 Hi there. I know I'm extremely late at the party, but this is an awesome time-killer game, even for a game jam submission! Great work and great game concept!

thank you so much!

I love it a lot, and as much as i'd love to donate, I can't. Maybe some other day though.

Haha no worries! Glad you enjoyed it

Why don't you change the theme of your site. I know it is suitle with the content but it is so hard to view it.  Perhaps, I should visit Freegames66 to play it. There are many other clicker games there.

I discovered this game and kept it on in a browser for about a week.

wow! I am really amazed, great job! I have to confess though that I probably won’t be fixing that one 😄

I am running a gaming PC with 64GB of RAM and 16 GB of Video Memory. Lets see if I can break it while I stream it on Twitch lol

Playing with this actually inspired me to go back and start working on an old game idea I have had for a few years.

That’s great! Best of luck let me know if you want a beta tester in the future

Can you please tell me what you programed this game on???

Hi there. This was done using Unity 5.6 with a Web GL export.

I like the concept but at the moment it's kind of grindy. Like the spiders in the second room, there was no way to beat them until I'd killed the first spider about 10 times and amassed enough cash to buy a few upgrades. This sort of grind is fine when the levels are randomised every time but when it's the same layout and enemies it feels a bit redundant. I can see you decided againt doing this but I personally think it's the randomisation after each death that makes roguelikes tolerable. Especially considering there's no reaction-based skill involved in your game.

Yea I think in retrospect, I would do randomization based on popular request

Thanks for replying and good to hear we're on the same page. Maybe when I get around to making my first game and putting it up here I can count on your feedback :)

Nice game, I like how you can automate anything and also deactivate it when you wish. Specially useful for the potions, although I felt I like I always needed a higher tier than what I was able to afford, but I didn't make much savings... Good job!

Nice game! Liked the graphics style and the rogue-like theme.

I don't quite see the use of upgrading defense, though, as saving 1 HP from 75+ damage doesn't seem worth it.

Also, would love that a new dungeon is generated each revival, it becomes quite repetitive as it is...

Defense is worthless and I didn't balance it properly and didn't want to yank it and risk bugs but when I play I never upgrade it. re random dungeons each spawn, it actually did go through my mind but I decided against it. 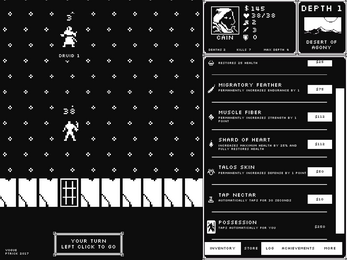 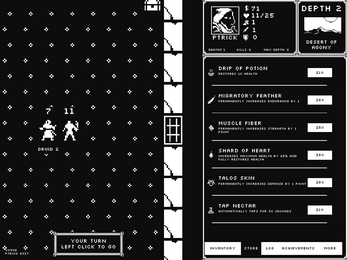